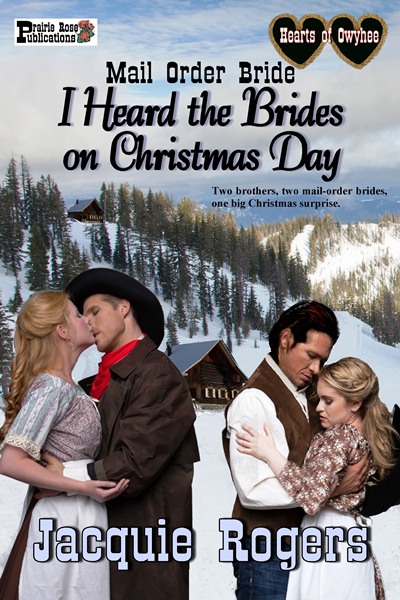 Posted by Jacquie Rogers at 12:28 AM No comments: 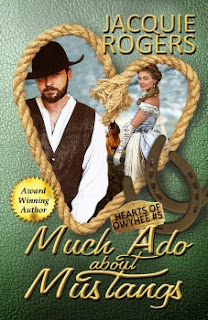 Much Ado About Mustangs
(Hearts of Owyhee #5)
by Jacquie Rogers


is now live on Amazon!

To celebrate the release I'm giving away a big surprise for readers who share the pinned post from the Jacquie Rogers Author page on Facebook and write reviews for the newest Hearts of Owyhee book!  (Details below.)

About
Secret lives, hidden dreams, and forbidden sex in the Old West—what’s a woman of nobility to do when a handsome rancher tears through her world like an Owyhee dust devil? 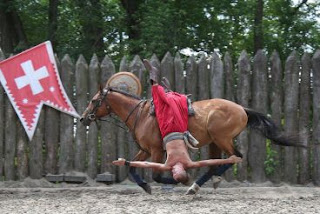 A British Aristocrat
Or is she? Lady Pearl Montford has performed in theatres all over the West for crowds of all sizes, but what would the world say if her secret was found out—that she's really plain old Pearl Jane Evans from Kentucky. To make matters worse, Pearl's past life as a professional trick rider is floating to the surface thanks to an unsavory suitor from her past who wants either her—or $10,000.

A Frustrated Rancher
Rugged Josh McKinnon has a ranch to build and blooded horses due in any day, but there's one problem standing between him and his dream—Lady Montford, a high-falutin' diva actress. Wrangled into playing opposite the snooty Brit in Shakespeare's ‘Much Ado about Nothing,’ Josh has to put his ranch on hold and put up with her nonsense for two weeks. Only thing is—how can he focus on his ranch when all he can think about is the way Pearl sits a horse?

Much Ado About ... Love?
With a slew of critters causing stirs left and right, meddling family members and townsfolk playing cupid, and horse rustlers causing a ruckus, Pearl and Josh have a heck of a time keeping their minds on the play and their hands off each other. When the dust settles and the curtain falls, will Pearl and Josh be able to overcome the odds working against them and find love in the wild Idaho countryside?

Contest
The rules are easy to follow. Good luck to all who enter!!

Here are the other Hearts of Owyhee books

Posted by Jacquie Rogers at 12:12 AM No comments: 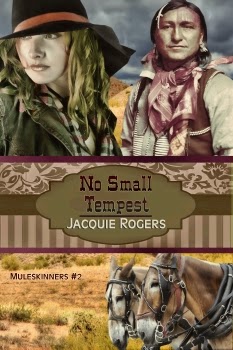 
It's here!  The second story in the Muleskinners series took a while, partly because I got caught up in a bunch of other projects and partly because of the publisher's schedule.


Elsie Parry aims to get this load of salt delivered to Kearney, Nebraska, come hell or high water. Or outlaws. Or Indians. Her other driver, Hank, and her former outlaw brother Zeb will help – but her eight draft mules (who think they are Greek gods) will make the difference. If she can keep them from being stolen – or eaten.

The Civil War wasn't kind to Elsie, her family, her home, or her neighbors.   In 1863, border ruffians abducted her brother, Zeb, along with the neighbor boy, Hank, from the family farm in Missouri. The next year, more came – she didn't know which side – and burned the farm to the ground. Elsie was given responsibility for eight draft mule foals and sent to live on a forested hill out of harm's way. She had little contact with the outside world, but her father visited infrequently.

She learned her mother had passed away, whether from sickness or hunger, Elsie didn't know, and neither did her father. In fact, he disappeared the last year of the war and Elsie thought he was dead, too, but imagine her elation to find him alive and relatively well five years later.

Meantime, those eight mules were her only friends and she'd named them after the Greek gods in her mother's book: Hermes, Zeus, Poseidon, Hephaestus, Aries, Apollo, Hades, and Plato (who's not a god but he's quite the thinker).  They have a good rapport, and she's very protective of them.

Her papa was born with the gift of blarney, and he's a lot better at making deals than actually coming through with them. Still, he's her father and she loves him dearly – her only family other than the mules.

The underlying theme of the Muleskinners series is undoing the emotional damage that the war caused.  It tore her family apart--killed some of them, and scarred the rest.  But Elsie doesn't let these things get her down.  She's determined, bold, and can be a little hard-nosed at times.  She's also compassionate and has a wicked sense of humor.

Part of her character is patterned after my late aunt, who could get just about any animal to do whatever she asked of them.  Some people have it--most don't.  My aunt had it and so does Elsie.  My aunt also lived by her beliefs--right, wrong, or Bisquik.  Elsie has that trait, too, super-sized.  She also has a lot of other traits that my aunt didn't have.  Elsie is, bein's she's a fictional character, larger than life.

Yes, you're better off reading Muleskinners #1: Judge Not first because this is a true sequential series.  Judge Not is the first leg of her journey, so while No Small Tempest could be read as a stand-alone, you'd get a lot more out it if you've read the first one.

About the cover model.  Or not.  We simply couldn't find any photos that worked for Elsie.  The one we chose was the least worst, so you'll see the same picture on the next three stories, and she'll be wearing the same thing unless we can find something else.  Despite that, I thought Karen M. Nutt did a great job with the cover.  Thanks, Karen!


I'd also like to thank Troy Smith who got me into this mess in the first place.  He told me I could write a story for the Wolf Creek series and I did--but used my own cast instead of the Wolf Creek characters as he intended.  Through that misunderstanding, this series was born, and now he, at the helm of Western Trail Blazer, is publishing it.  Go figger.

May your saddle never slip. 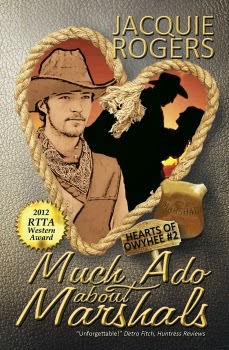 Much Ado About Marshals
Hearts of Owyhee #2
by Jacquie Rogers


5 stars from Laron Glover: Need a break? This is a FUN book (seriously--when's the last time you read a laugh-out-loud book?)! Turn off the iphone, kick off yer boots (or Jimmy Choos) and let Jacquie Rogers provide that mini-vacation you KNOW you need!

Low-down on Much Ado About Marshals


Rancher Cole Richards rescues his friend from robbing a bank, but is shot for his efforts, and now is a wanted man. His friend takes him to Oreana to see the doc, but Cole's mistaken for the new marshal!

Daisy Gardner is obsessed with solving crimes just like dime novel heroine Honey Beaulieu. But Daisy's parents insist she marry a farmer. Problem is, she can't be a detective if she's stuck miles from town. What better solution than to marry the new marshal.

Now Cole faces a dilemma few men have to face—tell the truth and hang, or live a lie and end up married. Either way could cost him his freedom.

5 stars from romantchick: Nancy Drew meets William Shakespeare ...hilarious characters, memorable colloquialisms, a clever, engaging plot and fine writing. All of which recommends Rogers' Much Ado About Marshals as everything to do about a charming, well-written romp.
Posted by Jacquie Rogers at 9:00 PM No comments:

#NewRelease MUCH ADO ABOUT MADAMS #Free Jan. 9 only!

Welcome to 1880s Owyhee County, Idaho Territory!  It was a hoppin' place in those days, and I've brought you several fictional adventures, both novels and short stories.  There are currently four books (I'm working on the fifth), and since the rights have reverted to me, I've re-edited them, changed the covers, and am slowly getting them reissued.  They've never been available on other online stores, just Amazon.  They're back up on Amazon, and now I'm working to get them on Kobo, Apple, and BN. 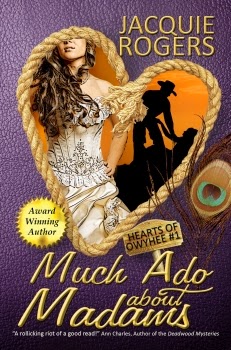 Much Ado About Madams
Hearts of Owyhee #1
by Jacquie Rogers


Oh my stars! Suffragist Lucinda Sharpe can’t believe she was hired to teach a bunch of soiled doves their letters. And what about the handsome brothel owner? Only a despicable cad would engage in such a business.

5 Stars from Detra Fitch, Huntress Reviews: "A story this good can only come from the imagination of Jacquie Rogers."

"A rollicking riot of a good read!" ~Ann Charles, author of the Deadwood Mysteries

Low-down on Much Ado About Madams

Blast that woman! Reese McAdams didn’t want the brothel in the first danged place, and now a suffragist schoolteacher is stirring up the works.

Can she reform the Comfort Palace ladies without losing her heart to Reese? Will her secret past ruin her future?

"Ms Rogers' clever western romance, MUCH ADO ABOUT MADAMS manages to enrousingly engage her growing readership while reminding us of the difficulties faced by the brave women who tamed the American West. All that, and did I say entertaining!" ~ John Klawitter, author of The Freight Train of Love
Posted by Jacquie Rogers at 9:00 PM No comments: 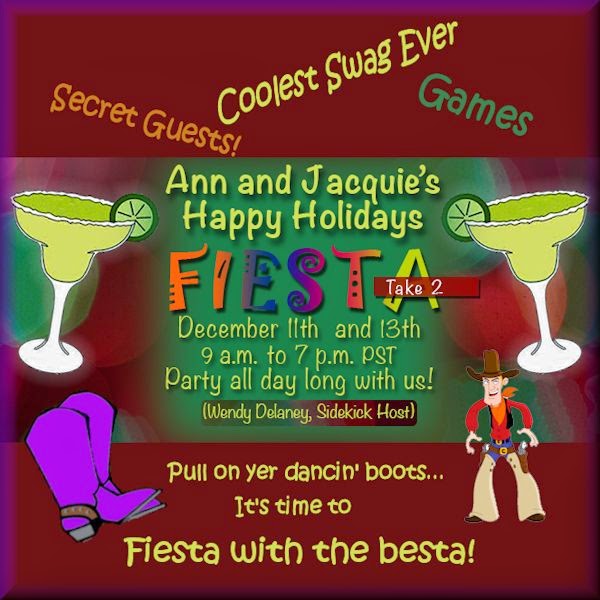 Don't miss out on the party of the year!

Unique guests, great prizes you won't get anywhere else--ever, and general mayhem with a few laughs here and there.

There are two Facebook events.  The first is Thursday, December 11th from 9am to 6pm Pacific Time.  To join, click here.  Who are the guests?  Get a load of this! 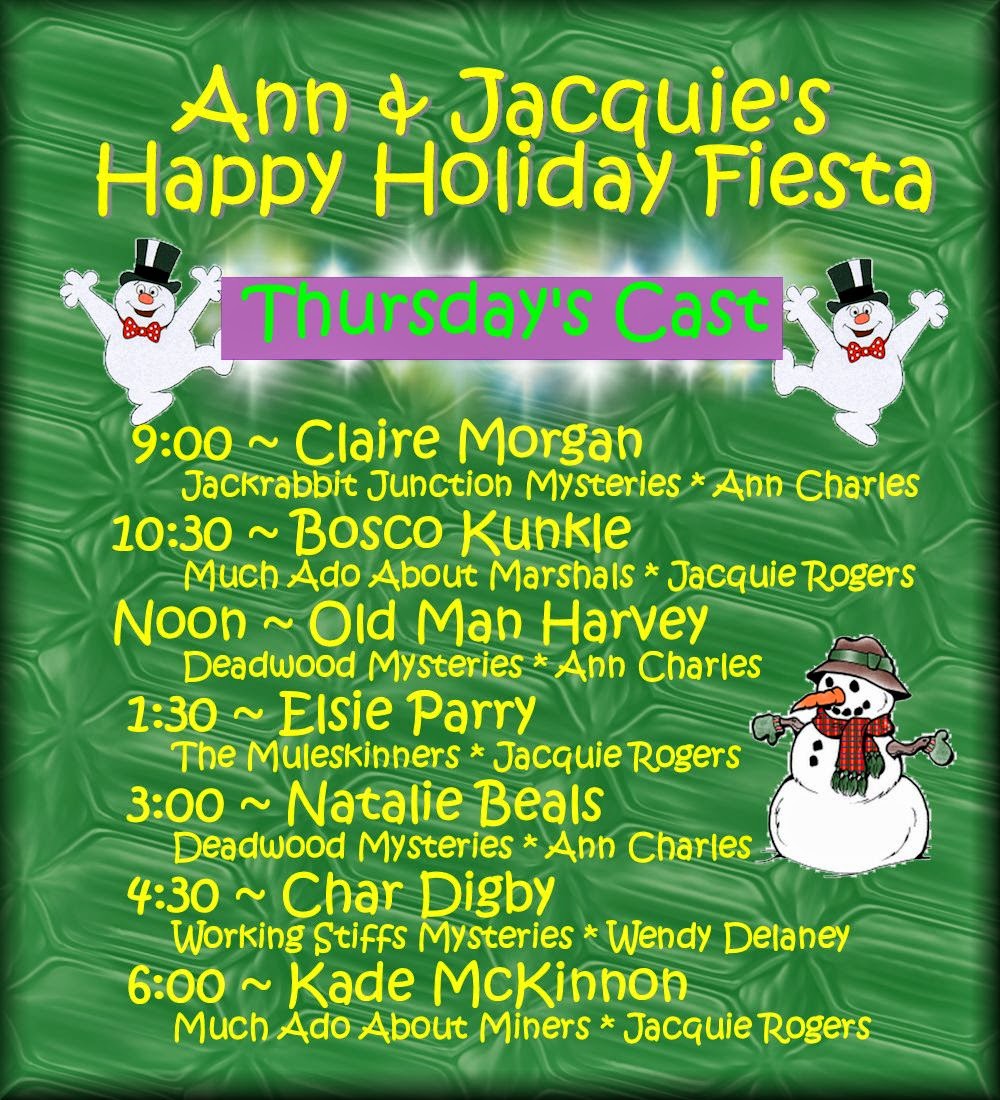 The second event is Saturday.  To join, click here. 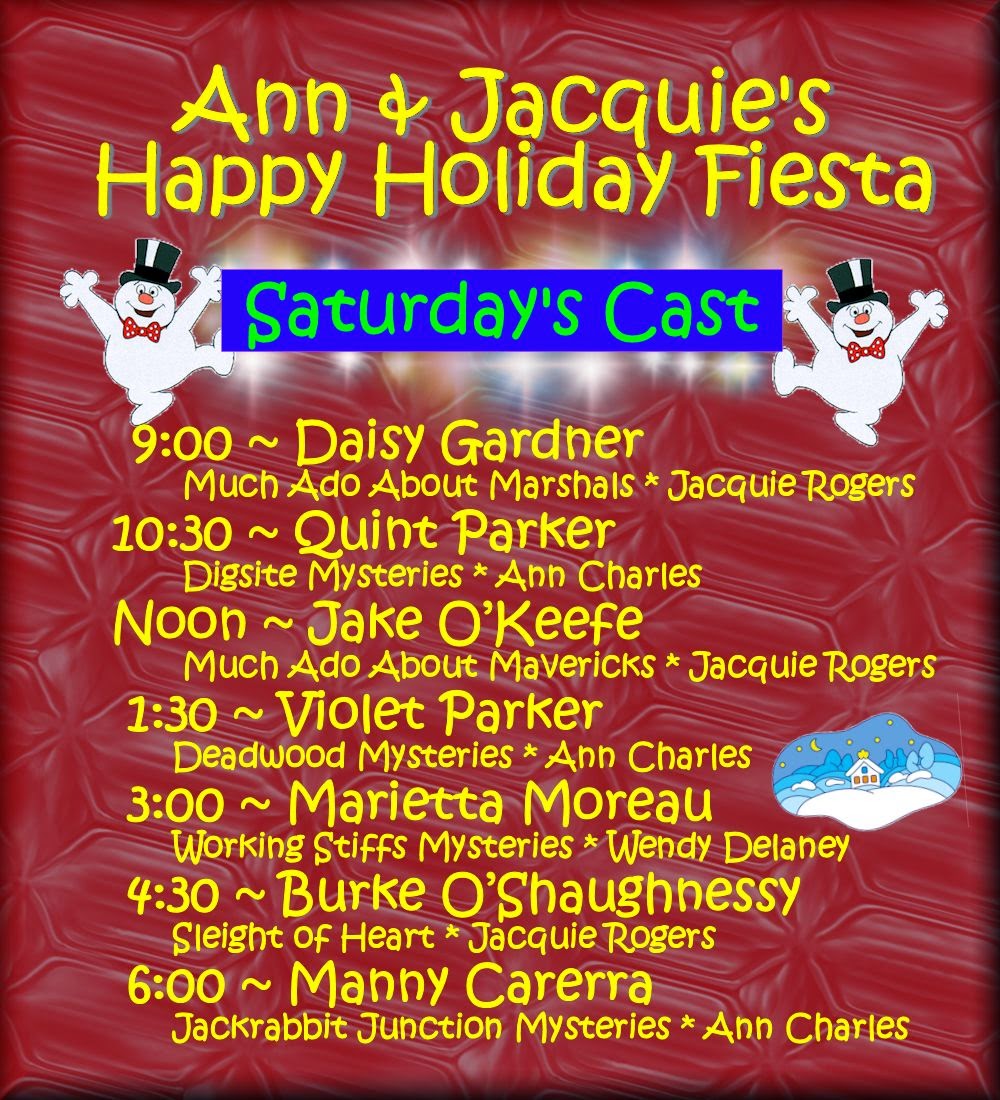 Lots of prizes, too!  Here are just a few: 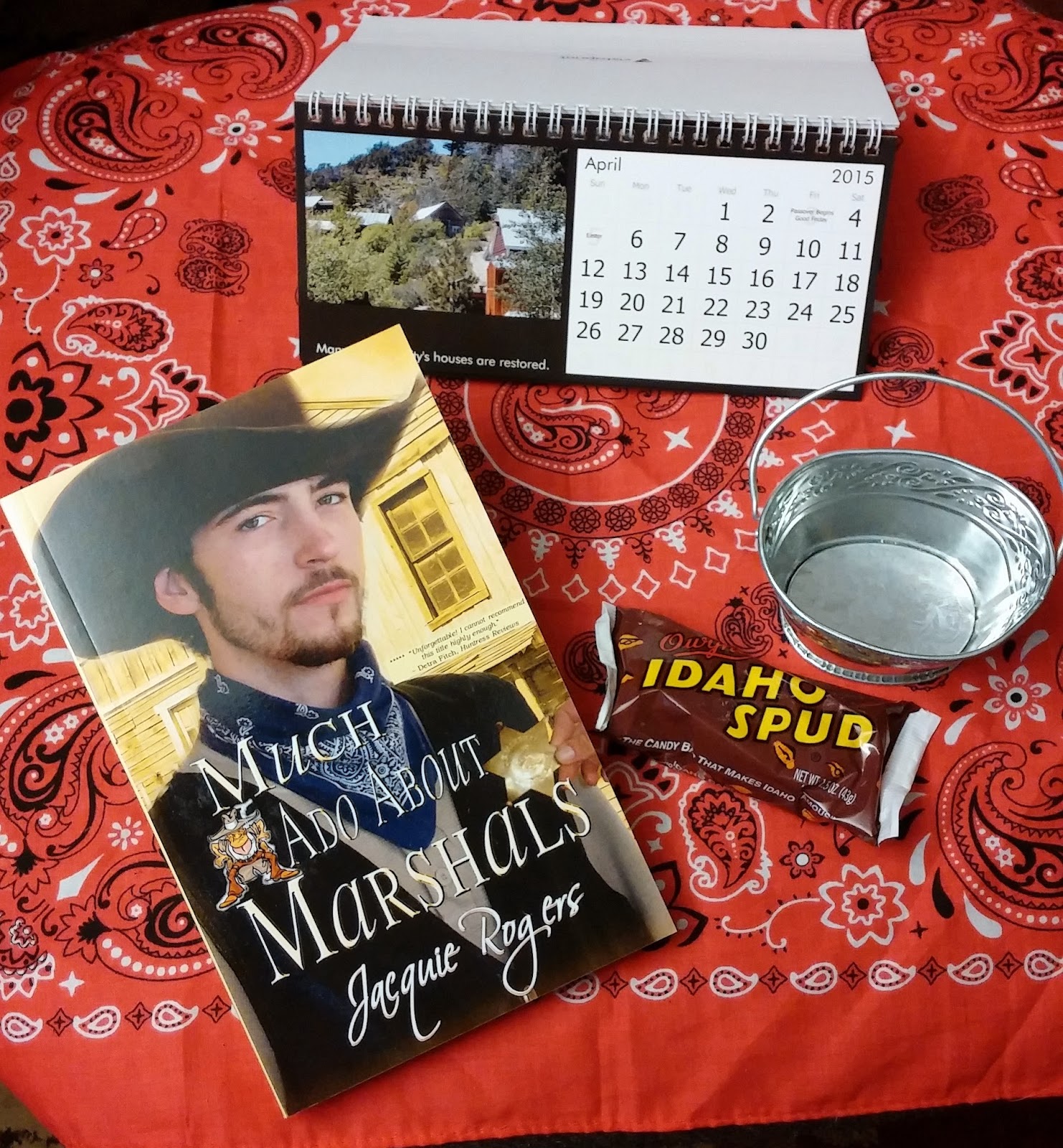 So be sure to join both. Grab a margarita--it's party time!

Posted by Jacquie Rogers at 1:49 PM No comments: