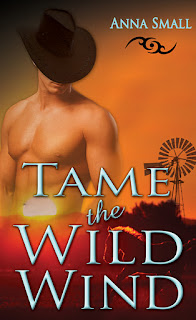 
Romancing The West welcomes self-proclaimed hopeless romantic Anna Small, author of western and contemporary romance. Anna, please tell us a little about yourself and how you started your writing journey.
AS: I wrote my first romance novel when I was 16. When I told my mom, she said I’d better not have any love scenes. Several years and manuscripts later, I am sorry to keep disappointing her! Seriously, she has been my editor, beta reader, and critic for more than 20 years. I live on Florida’s Gulf Coast near a quaint little town complete with ancient Indian mounds and rumored pirate ghosts. My husband of 15 years allows me to model all my heroes' hands on his own, and our two children continue to alternately inspire and drive me crazy.
RTW: Kids are famous for keeping us off-balance! Tell us about Tame the Wild Wind.
AS: Cassie Gibson heads west to the ranch her father left her. She is shocked to find the land already claimed--by a handsome stranger who won the land in a poker game. Neither of them possesses a legal deed, so they agree to share ownership. On the run from his past, Jed Hazard only wants a quiet life. But Cassie turns his life upside down.
This book has everything: a very romantic love story, a wildly attractive (and meddlesome) brother, saloon girls with hearts of gold, a really bad villain, and some of the sultriest nights ever described in the New Mexico desert!
You Could Win...
a free ecopy of Tame the Wild Wind!
and/or a $10 Amazon Gift Certificate!(details at the bottom of the post)
RTW: If you lived in the Old West, what modern convenience would you miss the most?
AS: It would be a toss-up between air conditioning and a computer! How can we live without the internet these days? I have shelves filled with research books and lately I’ve used the internet for a lot of research. Having said that, I wouldn’t mind being Cassie –- stuck in the middle of nowhere on a lonesome ranch with a blue-eyed hunk like Jed.
RTW : Are there any common errors in western historical romances that bug you?
AS: The portrayal of the Native American is probably the worst. I have never wanted to read a book that had a blonde, blue-eyed “Indian” as a hero. While I know that there were people with one native parent and one white, I still want to read about a hero who is a true Native American. Are the authors afraid that readers won’t believe a proper young miss won’t or can’t fall in love with a man who looks so different from what she’s used to? All anyone has to do is watch Dances with Wolves (Wind In His Hair is such a hunk!) or even Last of the Mohicans to see handsome and hunky Native American heroes.
RTW: Why is Jed perfect for Cassie?
AS: As the story begins, their personalities are very different. Cassie is willing to take a risk whereas Jed is careful and plans everything out. She sees marriage as the solution to their common dilemma, while he sees a partnership. Their comic banter came out of nowhere while I was writing this. I hadn’t meant to make her so sassy or him so scowling! As their friendship and love grows, they find that they complement each other.
RTW: You have an excerpt for us (thanks!). Please set the scene.
AS: Cassie and Jed have only known each other a few hours and have kept a polite distance. After a quiet supper, they head to the river to clean up. He goes one way, she another. Then, a sneaky, scary snake happens to show up!
Excerpt of Tame the Wild Wind by Anna Small
“It’s gone! You’re all right now,” he said, his voice muffled. He spat out a mouthful of her wet chemise, his heart hammering fiercely. He didn’t like snakes, but that wasn’t what agitated him.
Cassie was a distraction.
An unexpected, delicious, distraction. His hands roamed over her of their own accord, slipping over her soaked garment. He hadn’t meant to caress her, but the sudden heat of her skin hit him like a runaway locomotive. All he wanted was to hold her tighter.
And he did.
Whew! (fans self) Here are a few buy links for Anna's western historical romance, Tame the Wild Wind: Amazon, The Wild Rose Press.
RTW: What are you cooking up for us next?
AS: I’ve got four sequels planned, two of them for Jed and Cassie’s sons, and the other two for his brother Tyler’s daughters. I’m trying to get them all completed in a particular order so they could release one after the other. Tame the Wild Heart and Tame the Wild Land are for Jed’s boys, and Desert Rose and Desert Angel are for Tyler’s wild girls!
RTW : Anything else you’d like to add?
AS: I love reading and writing historical romance, and I hope it shows in my books. I truly love the world I created in Tame the Wild Wind, which is half the reason I have planned the sequels. It’s hard to let certain characters go sometimes I guess authors suffer from empty nest syndrome, too!
Win a Free Book!
A randomly chosen commenter  will win free e-book of Tame the Wild Wind!
Be sure to leave your email address in your comment or we'll have to choose another winner.
Win an Amazon Gift Certificate!
Comment on Anna's website, and you will also be entered to win a $10 Amazon gift certificate!
Thank you, Anna, for visiting Romancing The West.
Posted by Jacquie Rogers at 1:05 AM