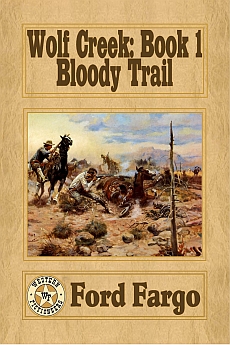 
For the next two weeks, we'll be visiting with some of the finest Western authors today.  They've collaborated to create a new series called Wolf Creek, and are writing under the name of Ford Fargo.  (Find out why below.)  To begin, the Romancing The West welcomes the president of Western Fictioneers, a historian, teacher, overall great guy, and the trail boss of the Wolf Creek series:


I’ve had the honor to serve as Western Fictioneers’ president this year, and of serving as series editor on our collaborative effort Wolf Creek. Jacquie Rogers has generously given us the floor here at Romancing The West, and we’re going to have different content up every couple days, as well as an opportunity for anyone who comments, on any of the days, to win a free book courtesy of Cheryl Pierson.

I’m going to begin today by telling you a little about our project. Our series takes place in the fictional town of Wolf Creek, Kansas, in 1871. Right now we have about twenty authors involved. Each has developed one (and in some cases two) original, unique characters to inhabit our town. Each volume in the series features six writers and their characters, with each author writing a chapter or two from their character’s POV; as editor, I write one of the chapters each time and provide the other contributors with a story outline so they’ll know where they come in. Then, when everyone has done their section, all six of us look over the manuscript to make sure everything fits together. Then, in the next book, we have a different team of writers/characters, with me being the only constant. So after we’ve done several, and you’ve perhaps developed some favorites among our cast, in any given book there’s a chance one or more of your favorites may show up.

For more details about our town, including lists of writers and characters and some cool maps, go to our Wolf Creek site, or the Western Fictioneers site.

We have a great team working on this project, but I want to single out two members who have gone the extra mile by helping me in my editorial duties. Livia Washburn and Cheryl Pierson have both been invaluable in their willingness to make suggestions and serve as sounding boards, and Livia has served as our last line of defense in formatting, proofing, and distribution.

We decided to have a “house name” on the front cover for continuity, and went with Ford Fargo. All six contributors, however, are identified on the back and interior. We went with Ford Fargo because that name has a storied history (pun intended) among many of our members. Over a decade ago, before our organization was formed and when many of us exchanged emails informally, one of the guys told us of a typo that editors had introduced into one of his books- a character was supposed to say “I give you my word, Fargo,”, but it came out in the final product as “I give you my ford, Fargo.” I believe it was Kerry Newcomb who said that Ford Fargo would be a great name for a western character, and several of us started using the name playfully in our books, always as a peripheral character. Now, many of us are Ford Fargo.

I have two characters in the Wolf Creek series:
We have three volumes finished, and three more in the works. Every few days for the next two weeks we’ll offer a synopsis for one or two of the books, and one very short excerpt. On Friday Livia Washburn will be talking about, not only her Wolf Creek character, but some of the other exciting Western Fictioneers publishing ventures that are available or coming soon. Several of us will be checking in every day to answer any questions and respond to comments.

And remember... in Wolf Creek, everyone has a secret.

Today I offer a synopsis and excerpt from the first book in our series:

Wolf Creek Book 1: Bloody Trail
In our first adventure, the town of Wolf Creek is assaulted by a small army of former Confederate guerrillas, who rob the bank and leave dead innocents in their wake. Sheriff G.W. Satterlee and his posse must overtake the outlaws before they reach Indian Territory—but the chase is complicated by the secret pasts of several posse members...

Satterlee and Charley Blackfeather were both good trackers, and Danby and the rest of the outlaws didn't seem to be taking any particular pains to cover up their trail. They followed the tracks without much difficulty. Satterlee knew they were counting on beating any pursuit to Indian Territory.

By midday, the posse hadn't come across any sign of the gang except the hoofprints they were following. Satterlee's keen eyes scanned the southern horizon for a dust cloud or anything else that would indicate they were closing in on their quarry. Frustration was growing stronger inside him.

He motioned Blackfeather up alongside him and said, "How much farther you think it is to Indian Territory, Charley?"

"If we make camp again tonight, we ought to reach there about the middle of the day tomorrow."

Satterlee frowned and lifted a hand to scratch his jaw.

"Danby's liable to be close enough by nightfall that he'll push on. If he doesn't stop and we do, we'll never catch him."

"If we keep ridin' after dark and he heads off in another direction, we're liable to lose the trail entirely," Blackfeather pointed out.

Satterlee sighed and shook his head. "You're not tellin' me anything I don't already know, Charley."

Quietly enough that the others couldn't hear, Blackfeather said, "We ain't gonna catch them before they reach the Nations anyways, Sheriff. I reckon you know that. What happens then?"

"Don't say that. I don't plan to turn back until I have to. Maybe we'll get lucky."

Blackfeather grunted. The sound was enough to make it clear he had his doubts about that.
~^~
Available at Amazon or Barnes & Noble (print or digital).


Authors and their characters 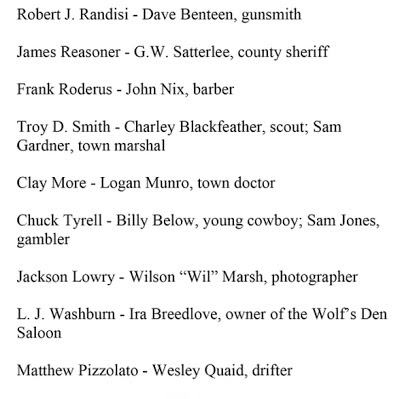 Win Free Books!
Cheryl Pierson is itching to give you a treat!  So one commenter in the next two weeks will win a print copy of
Wolf Creek: Book 1, Bloody Trail
(USA mailing only)
Comment on every post for extra chances!

Please include your email address so we can contact you; otherwise, we'll draw another winner.
Posted by Jacquie Rogers at 10:02 PM