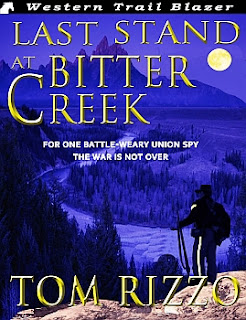 
Romancing The West welcomes Tom Rizzo, who has been a writer all his life, including a stint at Associated Press.  Now he's moved on from news stories, ads, and obituaries to fiction — which is luck for us.  His first novel, Last Stand at Bitter Creek has been received very well, and if it's not in your TBR pile, you're missing out!  Now, to Tom.  First, please tell us what the book is all about.

TR: Union Army spy Grant Bonner, tired of living a life of deception, desperately wants to put his past behind him, but agrees to one last assignment—the routine surveillance of a cunning, battle-hardened military commander gone rogue.

When the mission is compromised, events spiral out of control, and Bonner finds himself entangled in an intricate conspiracy that could cost him everything—including his life. Undeterred by relentless odds, he emerges from hiding to pursue a single clue he hopes leads to the one person responsible for trying to destroy him. The hunted and the hunter are on a collision course.

RTW: What aspect of life in the Old West intrigues you the most? Did you work that into Last Stand at Bitter Creek? What didn’t you include that you wish you could have?

TR: So many things intrigue me about the Old West. For starters, its immense and stunning landscape—a borderless canvas that often evokes powerful emotions within me. Natural beauty aside, the most intriguing aspect of those years—particularly the last half of the 19th century—was the spirit of individualism, the courage, and the determination of those who pioneered and populated the frontier. History of the American frontier reads like a novel, with real-life heroes who had to find ways to cope with incredible odds—the land, wildlife, brutal weather conditions, and actual villains to established and, more importantly, to preserve a special ways of life. I tried, and hoped I succeeded in showing how my cast of characters embraced those qualities.

RTW: Time travel to the year your book is set. You’re the same age as Grant Bonner — what/where would you visit first? (Yes, you have a few dollars burning a hole in your change purse.) What would your occupation be, and what danger would you find?

TR: I'd head to Cheyenne, Wyoming, on special assignment as a newspaper reporter and get a room at the Union Pacific Hotel - considered a "first class hotel on the Plains" – and use it as my base of operations. My assignment would be to cover the Wyoming Cattle Boom, to learn how much of its expansion is linked to Eastern and European investors and determine who's benefitting the most and who is not, and why.

Any danger I'd encounter would no doubt revolve around my poking around for information, some of which would be considered private and privileged, and none of my damn business.

RTW: Would Grant Bonner get along better with Ulysses S Grant, Jesse James, Virgil Earp, or Wild Bill Hickok? Why?

TR: Ironically, Bonner would get along with both. As a former spy, he walked both sides of the street when it came to law and order. And, he's perfectly comfortable in the company of heroes or rogues because of his ability to adapt to different situations.

RTW: What song best portrays Last Stand at Bitter Creek? Who would star as Grant Bonner? What character would Tom Rizzo play?

TR: Well, Jacquie, I would want an original — and inspiring — score of music created for the film. I haven't yet given serious thought to the individual I'd want to play Grant Bonner — as if I would have any say in it! But, I'll give it more thought when Hollywood calls. As far as what character I'd like to play, it's probably the role of Sheriff Will Denton, who Bonner encounters along the way. A man comfortable with himself, but uncomfortable knowing too much about another man's motives. A man who likes all contingencies covered.

RTW: Why must Grant Bonner take this particular story journey? Excluding his outward quest for exoneration and justice, what does he have to prove to himself?

TR: He has a burning need to carry out the original assignment he was given, despite the odds and despite the dangers involved. He also needs to know what makes a man like Marcus Steele tick—what makes a man like him think he can control others by only willing it. And, what is behind Steele's willingness to sacrifice the lives of others to achieve his own brand of success. As much as anything, Bonner wants to know why he was singled out for Steele's relentless wrath.

RTW: It's our lucky day because you have an excerpt for us.  Please set it up for us.

TR: This is Chapter 4, which helps define what Bonner is up against.

Excerpt of
Last Stand at Bitter Creek
by Tom Rizzo


Marcus Steele clenched his fists, regretting the exchange with the junior officer. He should have ignored the incident, but worried about those pine boxes getting damaged. No real harm done, he decided, as he approached the cowboy slouching on the bench a few yards behind him, legs outstretched in front of him.

"Are we all set?" the colonel asked, finding difficulty suppressing the gnawing sensation, which often accompanied him into any important battle. He would rest easier, once finished with this unpleasantness.

"Yep," said the man, tipping his hat back and sitting up straighter, and looking past Steele at Bonner. "Problems?"

"A little too inquisitive for his own good."

"Looks harmless to me," the man said.

"Appearances and reality can often be at odds." Steele glanced back at the lieutenant. "I'm not sure what it is, but there's more to him than he's letting on."

"He gonna be at the livery with the others?"

"I have different plans for him. Actually, he is going to be quite useful. He just doesn't know it."

The man nodded, and Steele thought he detected a spare smile. He admired this kind of physical economy—a man of few words, known only by his surname. The most eloquent statements this cowboy made came from his gun. When the man left, Steele saw the lieutenant standing where he left him. He's up to something. Over the years, he learned to rely on an acute sense of intuition, and it served him well.

The lieutenant's remark about the manifest troubled him. In his experience, most men weren't so observant—unless he happened to be on the lookout for something specific. Steele embraced, as did many of his peers, an adage of Frederick the Great, It is pardonable to be defeated, but never to be surprised.

He brushed the incident aside, and stepped across the siding into a small clearing where a group of men on horseback waited, looking restless. Some wore faded and wrinkled Union blue; others were dressed in soiled, gray Confederate uniforms, and the rest in civilian clothes. He looked up at the lead rider and nodded. The cowboy raised his hand into the air, wheeled his horse around, and led the group out. Two riders stayed behind. When the dust cleared, Steele joined them.

"Everything in place? And are you clear about where to transport the merchandise?"

"There has been an unforeseen development, which requires a slight adjustment to the plan," Steele told them. "Here's what I want you to do..."


RTW: Whew, boy, Bonner's in trouble!  Loved the book video, too.  What’s next? Is Last Stand at Bitter Creek a part of a series? Has it been nominated for any awards lately?

TR: I'm at work now on a sequel; I'm bringing back a few of the characters that readers expressed interest in—such as, Bonner, of course, along with David Webster, the black Union Army officer who played such a key role in the story.


And, I'm pleased to say Last Stand At Bitter Creek is a finalist for a Peacemaker Award for Western Fictioneers' Best Western First Novel.


RTW: Congratulations for the well-deserved nomination!  That's a very high honor and I wish you luck in the final judging.  Anything else you’d like to add?


TR: I'm all talked out, at least for this moment. But I appreciate your invitation to join you on Romancing the West. I've had fun with your questions.


Thanks, Tom, for joining us this week.
See you Thursday!