Snake Oil
and
Phrenology
by Keith Souter aka Clay More


Snake Oil
In the great days of the Medicine Shows, peddlers of patent medicines were derogatively called Snake Oil salesmen. It was thought that they were guys who would entertain you with music and a few conjuring tricks, then wheedle money out of you with their claims of wonder cures before disappearing into the night while you writhed in agony after a dose or two of their poisonous nostrums and potions.

In fact, snake oil is a Traditional Chinese Medicine of great antiquity, used as an embrocation to rub on painful parts of the body. It is prepared from the Chinese Water Snake (Enhydris chinensis) and used for all manner of rheumatic and arthritic pain by practitioners. It found its way to America during the time of railroad expansion and was brought by Chinese workers.

Along with many such rubefacients (A rubefacient is a preparation that is applied to the skin and rubbed on. It will produce some skin irritation, which may over-ride the pain from the underlying tissues.) it may have helped, which would account for many ‘medicine shows’ selling it widely. The thing is that it was then usually done with great gusto about its qualities. A good medicine show man would probably extend the list of conditions that any preparation could be used for, the result being that most of these things were ultimately sold as panaceas to cure everything from piles to baldness, and from minor illnesses to the most serious. And the dangers of such salesmanship are all too obvious.

I wrote a story based on this premise in the Western Fictioneers last anthology Six-guns and Slay Bells. It is about a phrenological Snake Oil salesman called Professor Thadeus Saxpuddle.

Phrenology
For years I have been making a study of the Victorian practice of phrenology and I have built up a small collection of original nineteenth century phrenological texts.

Essentially it was a system devised by Dr Franz Joseph Gall at the end of the eighteenth century, who proposed that the shape of the skull mirrored the convolutions and functions of the brain. The term was derived from the Greek phren, meaning ‘mind’ and logos, meaning ‘study of, or knowledge.’

In this it is notable that phrenology pre-empted the later science of psychology, which is derived from psychos, meaning ‘soul.’ Hence psychology, to be correct, is the study of the soul.

From extensive anatomical studies and empirical observation Gall had concluded that the brain was made up of individual organs or faculties, each of which represented the various temperaments, emotions, mental abilities and controlling functions of the body. By assessing the shape of the skull, the size of its prominences, its lumps and bumps, he came to believe that it was possible to predict an individual’s strengths and weaknesses, their potentials and their failings.

Gradually, phrenologists built up a map of 46 of these faculties arranged over the skull. They grouped them into four main divisions, so that those faculties at the front of the head represented the intellectual functions and those at the back represented the domestic or social faculties. The top of the head included the moral and religious sentiments and the sides were occupied by the animal propensities.

In the Victorian era professional phrenologists set up in consulting rooms like any medical specialist or general practitioner and made good livings. People flocked to them to have their heads read, to see what they should be doing with their lives, and to gain answers in matters of love, business and life in general. Children were taken to see what path of life they should be groomed for.

And it garnered plenty of praise, all across the world. From Vienna to Chicago it gained huge popularity. Indeed, the town of Fowler in Colorado is named after the eminent New York phrenologist, Oscar Fowler.

‘I declare that the phrenological system of mental philosophy is as much better than all other systems as the electric light is better than the tallow dip.’

‘I never knew I had an inventive talent until phrenology told me so. I was a stranger to myself until then.’

And even Professor Alfred Russel Wallace, the explorer, geographer, naturalist, anthropologist and biologist, the contemporary of Charles Darwin, whose own work on natural selection made Darwin rush his Origin of Species into print, said:

‘The phrenologist has shown that he is able to read character like an open book, and to lay bare the hidden springs of conduct with an accuracy that the most intimate friends cannot approach.’

Heads for Murder
In establishing its credibility phrenologists looked for ways of demonstrating that the shape of the head, and the size of various prominences could equate with known characteristics. Accordingly, phrenologists took every opportunity to examine and take casts of the heads of famous and celebrated individuals.

Yet a rich source of heads from which phrenologists could make casts came from the gallows. And here all of the deficiencies of moral faculties, or the prominence of hedonistic and greedy ones was portrayed as giving legitimacy to phrenology.

William Calcaft was the most famous English hangman in the Victorian era, who executed over 450 people the length and breadth of the land. He favored the short-drop method, which often left the victim dangling so that they strangled rather than broke their neck. He supplemented his income by selling segments of the rope he used, apparently charging up to a pound an inch. It is probable that he also permitted phrenologists to take casts of the victims after their execution. 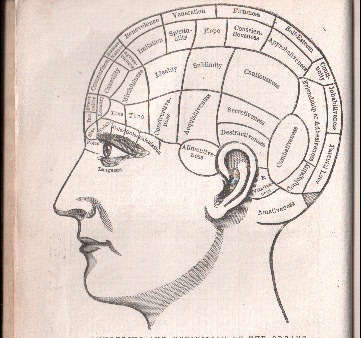 Ambrose Lewis Vargo, a London pharmacist and phrenologist wrote a popular book in 1871 entitled Orthodox Phrenology in which he described the head casts of various types of people including many executed murderers. Indeed, at the back of the book he gives a list of phrenological casts ‘suitable for Public or Private Museums, Literary and Scientific Institutions’, priced at 3s 6d, or 30s per dozen. Of the 74 casts available 26 were murderers, including those of the West Port Murderers William Burke and William Hare and their imitators, the body snatchers known as the London Burkers, John Bishop and Thomas Williams.

James Greenacre (1785-1837), the infamous Edgware Road Murderer was a grocer who lived on the Edgware Road. He murdered Hannah Brown, his fiancée and dismembered her body, throwing her head in Regent’s Canal. He was publically hanged at Newgate Prison by the incompetent hangman, William Calcraft. In his book, Vargo depicts Greenacre’s head with a low, prominent forehead, which confirmed Shakespeare saying ‘Foreheads villainous low.’

Marie Manning (1821-1849) was convicted with her husband of murdering her lover, Patrick O’Connor. The case was called The Bermondsey Horror and ended with the public joint hanging of her and her husband by William Calcraft outside Horsemonger Lane Goal. Charles Dickens attended the event and later wrote a letter to the Times, expressing his disgust at the glee that the crowd took at the execution. Vargo has an illustration of Ms Manning’s head in order to illustrate the well developed faculty of ‘Alimentiveness, which can lead to the taking of pleasure in excess. Her gluttony he felt was demonstrated by the hearty breakfast that she ate on the morning of her execution.

Dr William Palmer (1824-1856), known as The Rugeley Poisoner was publically hanged in Stafford in front of a crowd of 30,000. He was convicted of poisoning one person, but was thought to have been a serial killer, perhaps murdering a dozen more. Vargo has an illustration of his death mask and draws attention to the poorly developed moral faculties.

Another phrenologist, Frederick Bridges, studied the heads of several convicted murderers, including William Palmer and William Dove and concluded that the angle between the nose, the ear canal and the brow – ‘the basilar phreno-metrical angle, ’ gave an indication of an individual’s animal propensities. The greater the angle, the greater the animal desires and the less the moral quality. He found that an angle of greater that 35 degrees was a common characteristic in all murders.

Who knows what the equivalent angle was for a Snake Oil salesman? 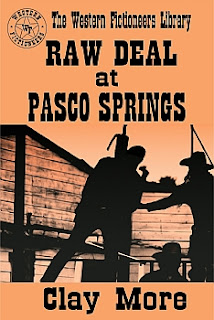 We will be tossing the names of all commenters this week into Keith’s medical bag, from which one name will be pulled out. The winner will receive an original signed copy of the hardback book Raw Deal at Pasco Springs. The drawing will be held Saturday, March 1, at 9pm Pacific Time.

Be sure to check out Clay More/Keith Souter's interview and read an excerpt of Raw Deal at Pasco Springs right here at Romancing The West!

Raw Deal at Pasco Springs is available at
Amazon and Barnes & Noble
Posted by Jacquie Rogers at 9:00 PM