The Toys
by
James J. Griffin

Romancing The West is honored to feature nominees for the Peacemaker Awards this week.

The Peacemaker Awards are sponsored by the Western Fictioneers, a group of some of the most talented and prolific Western authors of our time.  On Friday, we showcased Peacemaker Lifetime Achievement Winner Robert Vaughan. 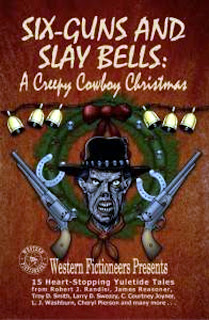 The Toys is based on actual events which took place during the Johnson County War in Wyoming in the 1890s. Two homesteaders were ambushed and shot in the back by an unknown gunman, who would have been in the employ of the Wyoming Stock Growers Association, the organization of large ranchers who wanted to drive out all the homesteaders in the region.

One of the homesteaders, John Tisdale, was killed while on the way home with Christmas presents for his family.

In The Toys, Tisdale is killed by a gunslinger named Harlan Stoddard. When Stoddard examines Tisdale's body, he notices several toys scattered about, including a doll which seems to be staring at him. Tisdale takes his rifle and blasts the doll's head to bits. Little did he know what that action would lead to.

The Toys is a short story done much as if Stephen King had written a Western. Tension builds as Stoddard is pursued, and attempts to flee Wyoming and his fate.

About the author:
James J. Griffin is a lifelong horseman, western enthusiast, and amateur historian of the Texas Rangers. His extensive collection of Texas Ranger artifacts is now in the collections of the Texas Ranger Hall of Fame and Museum in Waco. Jim has written a series of Texas Ranger novels, traditional Westerns in the best sense of the term. His books are suitable for almost all ages. Jim is also a contributor to the Western Fictioneers Wolf Creek and West of the Big River series.

Learn more about Jim and his books at his website.

Congratulations for your nomination, Jim!

The Lifetime Achievement Peacemaker will be presented to Robert Vaughan


Winners will be announced on June 1, 2013
on the Western Fictioneers website.
Posted by Jacquie Rogers at 12:40 AM